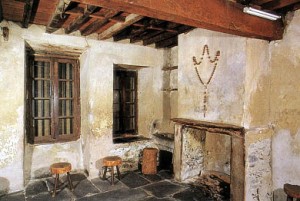 The house we now call “Cachot” (literally: the prison) was before a prison that became so unhealthy that the prison had been transferred elsewhere. The current owner was a cousin of the Soubirous, which describes the room of a little more than 16 square meters as “a dark and unhealthy room”. In the courtyard there was manure that made the place smelly and infected. “The imperial procurator said that it was “an infected and obscure place.” As if this were not enough, another misfortune strikes the family: François was arrested for stealing two bags of flour, denounced by the owner only because of its extreme poverty made him suspicious. He was released after a week, but the suspicion of the villagers also prevents it from finding that bit of work in the day, the family’s life is getting tougher. Yet, as witnesses of that days tell, the harmony and serenity always reign among them, they always recite the prayers in the evening and in the morning and in that miserable house you can feel the peace and serenity.

Bernadette cannot go to school, she cannot learn French that is required to attend the catechism and, therefore, she cannot prepare for first communion that she craves. So parents decide to send her to Bartrès to the nurse that promises to teach her the catechism and, in addition, the family will also has one less mouth to feed.

The little girl leaves in September 1857. It was a stay spent mostly to graze sheep in the cold until sunset in solitude. The teaching of the catechism by the nurse was very occasionally in the evening, when the girl was exhausted and even less able to understand the French who she do not knows at all. “You’re too stupid – she says his old nurse – you can never make the first communion.”

Then, Bernadette shows all her character and her pride, she decided to return at Lourdes and she did it on January 28th, 1858.

Bernadette returned to a life of hardship and misery, but she knows that she will find the love of her family and so that enough.

With joy, she proposes to her mother to go looking for some firewood to heat up the family, the mother hesitates, fearing for his health, but then relents.

Here begins the story of the apparitions at the Grotto of Massabielle.