Lourdes is a small town of about 5000 people, whose economy is based on agriculture, pastoralism and the activity of the mills very active and flourishing in that age. 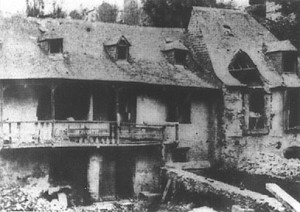 The Boly Mill is the place where Bernadette was born in 1844, is the “mill of happiness” because there was the family coming from the extraordinary love between mom Louise and dad François who spend in wellness and serenity ten years.

Bernadette will leave it for her first two years to go to Bartrès nurse, at the home of a customer of the mill, Marie Aravant, who had lost a child a few days. Mom Louise, in fact, can no longer feed her because of a domestic incident. In the mill today everything has remained as it was, with the exception of furniture that Soubirous were subsequently forced to sell.

It was, at that days, a welcoming abode; the millers, in fact, belonged to the middle class. The family lived in an atmosphere of serenity, faith, prayer and reception of the poor. They all work together and all together pray the morning, in the evening they always recite the rosary, so Bernadette learns the only two prayers in French, the Hail Mary and the Our Father. For the rest, she continued to speak always and only in dialect.

But during those ten years it begin to manifest negative events that will slowly ruin the Soubirous family: the illness and death of several siblings (of nine siblings born only four survive), the cholera epidemic that will forever leave in Bernadette the sign of a serious asthma, loss of one eye of his father in an accident at work and the relentless change of the industrial revolution that declares the end of the small mills in favor of the coal more profitable. Gradually the family falls in the direst poverty, there is no more money to eat and, more importantly, to pay the rent.

In June of 1854 the Soubirous, completely ruined, they are forced to leave “the mill of happiness.”

François will look for a modest arrangement, he will work as a laborer a day, Louise washes his clothes, but everything will be useless: now the Soubirous can no longer survive, and after three years of trying, they will end up to the “cachot.”